USPSA has a few different divisions that require different guns and equipment to be used giving every competitor the chance to participate on a level playing field. Things like magazine length or capacity can be restricted, or other items like your holster type and location may also take you from one division to another depending on where it is located on your body. Divisions like production and single stack have a fairly tight rule set, where limited, PCC, and open have very minimal restrictions on what you can use and do to your equipment. This is not meant to be a comprehensive guide to the rules, but more of an overview of the highlights of each USPSA division to help make your selection a little easier.

If you are not sure what division your equipment puts you in, don't worry, just follow along below. There are a few rules to divisions that the questions do not cover, but is a great guide to get you to the range. There are many times that one gun can compete in a few different divisions and in that case we recommend to do what you feel you would like the most. 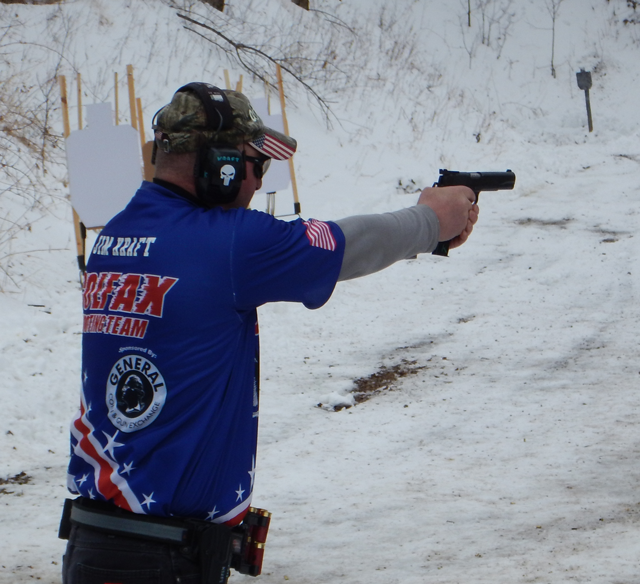 If you are new into USPSA, Limited is more than likely the division you will shoot your first time. Almost every gun sold with iron sights will comply with the equipment rules for Limited making it one of the most popular divisions. In almost all cases no more than 3 full size magazines will be required to shoot a 32 round course of fire, requiring minimal equipment to get started. Magazines are limited by length and not round capacity, allowing shooters to fit 20+ rounds of 40 S&W, while still making major power factors. Handguns can be modified quite extensively, but cannot have a compensator nor an optic. Many competitors will use customized guns that have custom slide cuts, enlarged magwells, frame weights, slide rackers, thumb rests, etc. all in an effort to make the gun easier and faster to shoot.

Limited is mostly made up of Glock 34 & 35's, CZ Tactical Sport's, Smith & Wesson CORE models, and also custom 2011 pistols, but almost every gun that you can buy from your local gun store will be legal for Limited.
Many shooters find the Limited division to be one of their most preferred because most stages will only require a single reload making stage plans efficient and having the ability to use major power factor scoring.

Race guns, holsters, and high-capacity magazines is what makes up the open division. Open is the go-fast division that has very little equipment restrictions allowing competitors to modify and tune their pistols to shoot flat and fast. Many open guns will have large magazine wells, compensators, red dot sights that are mounted to the frame, and other features that make the gun easier to manipulate and shoot. With 9mm being the caliber of choice, most competitive shooters will reload their own ammunition, tailoring it to work well with the guns compensator and also make major power factor, which you can not normally find off the shelf.

Most of the Open guns are custom 2011 style, but it is not uncommon to see pistols like a Cz Czeckmate or Tanfoglio Stock 2 playing in the Open division. The 2011 style pistol is almost like an AR-15 with a lot of different accessories and manufactures to choose from, ultimately letting you customize the pistol to your hands, grip, and shooting style.

The production division is sometimes considered the “stock” division with magazine capacity limited to 10 rounds, hardly any external modifications are allowed to your gun, and all the equipment on your belt must be located behind the front of your hip bone (there is an image in the rule book). You can modify certain items like hammers, grip panels, and almost all internal parts, but overall the gun must appear like it did from the factory and be on the list of approved production guns.

Guns like the Tangfoglio Stock 2, CZ Shadow 2, Glock 34, and Sig P320 are by far the most popular and top performing guns in USPSA right now, and many people ask how much of a factor the gun is to the shooters performance. Anyone that says it doesn't matter is straight up lying and it does matter, but not nearly as much as you would think. Certain guns fit some hands better than others, and depending on the ammunition you have access to, one type of pistol may be more reliable than another making the decision on which gun to use fairly easy. What does matter more than anything is to practice (dry-fire) with the gun you are going to use.

For first time shooters it can be hard to participate in the production division due to the magazine capacity limits. Since it is a 10 round limit, and some stages can have up to 32 shots (if you do not miss), meaning you need a minimum of 4 magazines and pouches to hold them on your belt. Most top shooters will have 5 or even 6 magazines on their belts so they can reload between target arrays and not have to worry about running out of ammunition before the last target.

Single Stack was made for 1911 style guns that use a single stack magazine. The SS division is made up of mostly factory guns with a few custom guns making their way into the mix. The rules for single stack are fairly simple since all of the guns have the same base frame that is a 1911. They need to fit into a box that has specific dimensions and also be under 43oz when weighed. Just like production your holster and magazine pouches need to be placed in specific spots with restrictions on certain types of holsters and magazine retention devices.
Since 1911s now come in different calibers, you can shoot minor or major scoring and depending on what power factor you declare you may be able to hold 8 or 10 bullets in each magazine. Major scoring is limited to 8 round magazines where minor scoring calibers can have up to 10 rounds per magazine. There are limitations to features your 1911 can have which are spelled out in the USPSA rule book and having some features may land you in the Limited 10 division.

One of the newest divisions Carry Optics is made up of mostly production-based guns that have a slide mounted red dot. The slide can be modified to accept a red dot sight, and with a lot of handguns coming straight from the factory with slides already milled for an optic, it is an easy and fun division to compete in. Magazine capacity is limited by length, just like the Limited division, but other exterior modifications are not allowed to the pistol. Equipment placement on the belt also mimics the production set of rules.
Participation in the Carry Optics division has grown very fast since you no longer have to line up iron sights and pick different depths of focus. Using a red dot sight allows you to always stay focused on the target with a red dot “projected” onto the target. An optic also helps aid newer shooters in being able to follow the recoil of the sights a little better and many shooters have used them as a training tool.

Carry Optics Appendix
Back To Top

Pistol Caliber Carbine is another one of the newer USPSA divisions, requiring a pistol caliber rifle is one of the very few equipment restrictions. A majority of competitors will use an AR-15 variant like a JP GMR-15 that have one and sometimes even two red dot optics but the Sig Sauer MPX, and CZ Scorpion are also very common to see at the range. Scoring is limited to minor power factor only, making a vast majority of rifles used chambered in 9mm. Magazine capacity or length is not limited, and it is common to see shooters start a stage with 45+ rounds, allowing them to shoot an entire stage without having to reload.
PCC is a great division to start in, since almost all pistol caliber rifles are easy to shoot with very little felt recoil, but it does bring its own set of challenges that pistols do not have. If you are right-handed, making a hard lean to the left around a wall can be difficult leading to off-balance shooting, and classifiers that require weak-hand (shoulder) shooting can be a fun challenge as well.

PCC Appendix
Back To Top

If you like classic guns the revolver class may be the one for you. With its own unique challenges, shooters that master the revolver platform are fun to watch and make it look easy, but it is far from. The division is made up of wheel guns and can participate in either major or minor scoring. Minor revolvers can hold up to 8 rounds where major power factor guns can only hold 6 rounds. A majority of the revolvers used in USPSA competition use moon-clips, along with specialized hangers on the belt that help make reloads lightening fast.

Essentially the Limited division but with a 10 round limit. This division is key for states that have restrictions on how many bullets a gun may hold. In Minnesota, Limited 10 is commonly used by competitors that shoot production or single stack and want to shoot a secondary division for fun or may have a pistol with features that make them not eligible for production or single stack but still want the additional challenge of a limited round capacity.

USPSA Rulebook
Back To Top