What you may want to bring
to a USPSA Match 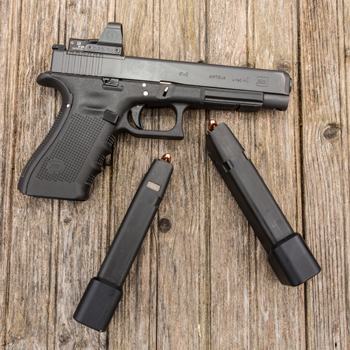 If you go to the range during any USPSA match you will find a wide variety of handguns, and now, even rifles used by any given competitor. Guns from mainly stock guns in the production division that can only hold up to 10 rounds, to open guns that have red dot optics, extended magazines & magazine wells that can hold 27+ rounds of 9mm ammunition. If it is your first time, we highly encourage you to bring what you have, and just ask anyone what division you will fall into with your equipment. When it comes to what class your gun is going to fall into, depends on a few simple characteristics of the gun, and your equipment. For the production division, there is a list of guns that are legal and the modifications made cannot affect the appearance of the gun. The biggest kicker for production is the capacity limit of 10 rounds, and for scoring only minor is available. The next "step" up would be to choose from either limited or carry optics divisions. Limited is easily the most popular because a wide variety of guns fall into this division. Everything from tricked-out Glocks, Smith & Wesson, and 2011 race guns but only have iron sights. Carry optics is primarily a production gun, but has a slide mounted optic, and the magazine capacity is changed to mirror the limited division rules. The limited division has both major and minor scoring available, but like production, carry optics is limited to minor only. Many people will consider the open division the pinnacle of USPSA race guns, and that is because they are purpose-built to do one thing, shoot flat and fast. With the frame mounted red dots, compensators, and magazines that allows competitors to shoot an entire stage without having to change mags, open is definitely a high-end division. 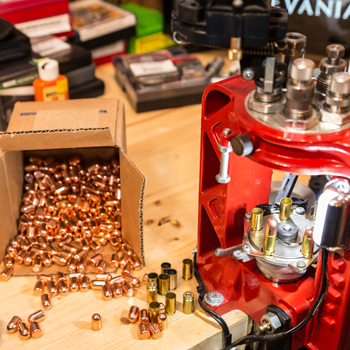 It is always important to bring your own ammunition, but it does occasionally happen that you forget to bring some, or just run short because of a reshoot. Stages can range from 1 all the way up to 32 rounds in a USPSA course of fire. Many competitors will reload there own or purchase specialty match ammo. It is very common for beginners to use store bought bullets for their first couple years of competition and practice but having the ability to custom tune your load for the gun and power factor can be a significant advantage in a competitive setting. Primary manufacturers like Federal Ammunition are starting to make power factor specific rounds that are guaranteed to make power factor but at big-box store prices. If you do not want to reload, it could be a good idea to try a few different brands and types to see what runs in your gun, but is still soft shooting and accurate. Nothing will ruin a good stage time like a malfunction, so it is essential to see what works first. You may hear about power factor of ammo, and that is the weight of the bullet multiplied by the speed, divided by 1000. Anything over 125 is considered minor, and if you are over 165, it is major scoring which in some cases can be an advantage. There are divisions like single stack and revolver that have capacity limits based on your guns power factor. 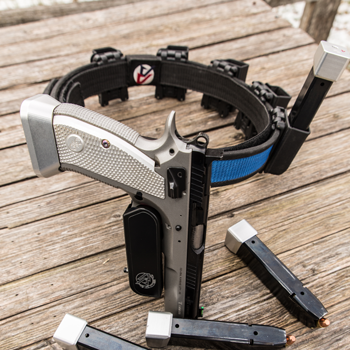 Almost all USPSA competitors will eventually end up with a belt, or rig as some will call them, but if you do not have a purpose-built USPSA rig don't worry, just use your everyday belt with whatever holster and mag pouches you have, but a double layer belt system does have its advantages. The inner portion will usually be a thin and flexible belt that can go through your pants loops and will set the tightness of your belt overall. The outer belt is going to be made of a thicker material that gives you a reliable and secure mount for your gun and magazine pouches. The inner and outer belts will then be able to couple together through a hook & loop style faster system like velcro, and some belts even come with a keeper system that will hold your inner and outer belts together just in case the velcro fails. . The two belt system lets you create a safe and secure belt, that can be removed easily if necessary. Your holster choice will need to comply with your division's rules. It is very common to see open or limited shooters using what is referred to as a race holster, because that is legal in there division, but in production and a few others that would not be legal. The only holster requirements are that it holds your gun securely and covers the trigger guard. Placement of the holster and the magazine pouches does also come into play when picking a division. Some divisions require that everything needs to be behind your hip bone, where others let you utilize any space on the belt. 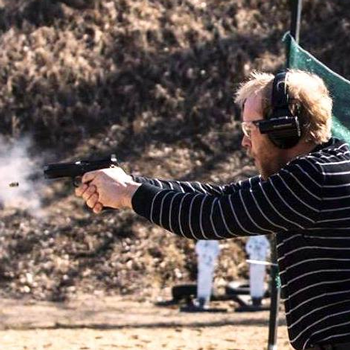 Whenever you go to the range to shoot any firearm, it is essential to have the proper safety equipment with you. That includes eye and ear protection, but also includes adequate clothing, gloves, and whatever you may need to get through the day safely. Eye and ear protection for when shooting is pretty straightforward and it is recommended to get glasses made for protecting your eyes during shooting since not all safety glasses are created alike. Many shooters prefer using an electronic style of ear muff that amplifies low decibel sounds but muffles gunshots and other louder noises. Some guns can be very loud, and some competitors will choose to double plug with ear plugs and muffs. It is not uncommon to hear that someone forgot their eyes or ears, and at SCAPSA we usually carry extra foam earplugs and safety glasses that people can borrow if the need arises. Another essential piece that is commonly found in range bags is a pair of gloves for resetting steel, setting up and tearing down stages, or repairing props. When heading out to the range, it is essential to check the weather forecast to see what the weather may bring. Some days can be sweltering where large amounts of liquids will need to be consumed, but also there can be cold and rainy days that will require the appropriate clothing and accessories, and without them, it can get pretty miserable, really quick.